Today I am sending out a happy birthday wish to Josh as he turns the big 32! It’s been a crazy week, so I didn’t have time to write a new story. Instead, I’m rerunning this older one. 😉 Hope you enjoy it!

In honor of his day, I thought I’d blog about one of my favorite “Joshisms”: the day he rounded up one of our wayward cows, Oscar (aka “the Grouch”). I think he (Josh, that is) was about 13 or 14 at the time.

The year after we bought our home, which sits on a 2-acre lot in what can still be classified as the country, Tom thought it would be a great idea to get horses and/or cows, fondly remembering animals from his childhood. I tried to remind him that “real life” isn’t always like we remember, but to no avail. Soon after, a family from the church we were attending moved to Colorado and couldn’t take their animals with them. Happily, he scooped up their three young steers with the intent of raising them for beef. And we got them for an incredible bargain to boot. Great idea, right? In hindsight, we should have insisted that they pay US to take them off their hands, considering that Oscar was almost certainly demon-possessed!

Anyway, we spent one long, hard month rebuilding the fence and fixing the holes around our pasture before having the three “adorable” cows delivered. And they really were cute, for about the first hour or two. It soon became apparent that the smaller two were sweet and tame, but they were bullied (haha!) into following the lead of Oscar, who could rival Houdini in being able to escape any prison. I swear we spent half of our life during that time chasing the cows around our yard, around all the neighbors’ yards, and once or twice even rounding him up from the other side of town! Let me just say that it was not the best way to get to know our new neighbors… It got so bad that I didn’t ever want to come home after work because I knew what awaited me: the sight of two cows hanging out in the (unfenced) front yard, with Oscar nowhere to be seen.

One day, as Tom tells it, he came home early from work.

The house was quiet with no kids in sight, so he was relaxing in our kitchen and enjoying a pre-dinner snack when all of a sudden he saw Oscar maniacally tear past the window, eyes bulging and tongue lolling. He moved to take a closer look but immediately jumped back after seeing another maniacal blur hot on his trail, dressed head-to-toe in army fatigues, camouflage face makeup included.

The first blur was, of course, Oscar, but the second was Josh, looking more than a little like a character out of Rambo, albeit on a smaller scale. He had come home from school to find the steers, once again, MIA. After easily rounding up the first two (their hearts weren’t really in the job), he tried repeatedly to sneak up on Oscar so he could herd him back to the pasture.  But every time the devilish beast caught sight of him, he’d take off again. They were not exactly friends at this point, and I guess that something inside Josh’s young teenage brain just snapped. He came in the house, dressed up in Tom’s Army fatigues, and covered his face in camouflage makeup. He was a man on his first-ever under”cow”ver mission!

Poor Oscar was so bewildered and freaked out by this strange creature screaming and chasing him, he ran straight past the house, actually bypassed the gate, and leaped OVER the fence back into the pasture to escape him.

Josh was 9 years old when Tom and I got married. The years haven’t always been easy, and we’ve had a power struggle or two (!) as he tried to adjust to life with a step-mama. Although he may not have come from my body, I couldn’t love him any more if he had.

You are definitely of my heart!  Love you Josh, and I hope your birthday is as wonderful as you! 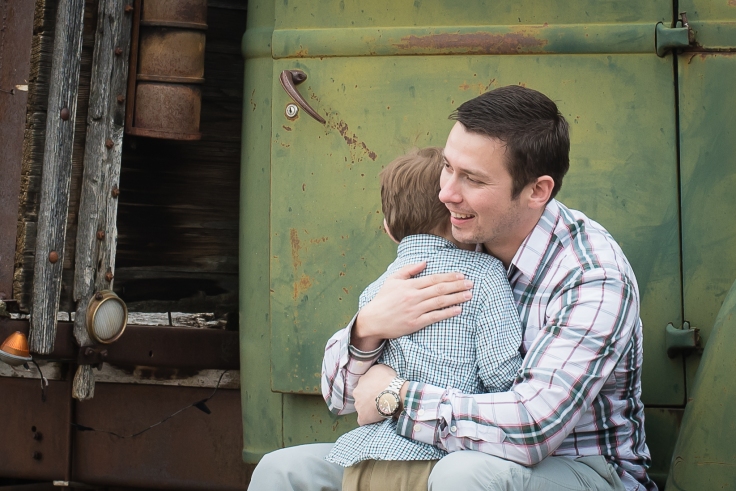