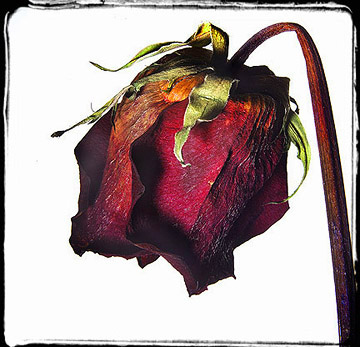 Each Friday I highlight old favorites from my now-abandoned blog “FROM THE TOP OF THE STAIRS.” I hope you enjoy the re-runs as much as I do!

In honor of Valentine’s Day yesterday which was — you guessed it — another flower-free day, I just had to share this post that still makes me smile at my dear hubby’s proof of his love for me. 🙂  In the spirit of full disclosure, I must admit that he did send me some very beautiful (live) flowers about a year ago, breaking his long-standing streak. I’m just hoping I don’t have to wait another 13 years for the next bouquet (hint, hint honey!)   🙂

The last time that Tom sent me flowers was roughly 13 years ago, back in that first magical year of marriage. We were living in the first of many small towns we would inhabit; a town filled with many  ummm… colorful characters. The local high school in said town held fundraiser after fundraiser throughout the school year; I swear one every-other week. Unfortunately, this small-town school was not known for being imaginative, so they used the same fundraising idea over and over and over and… Yeah, you get the idea.

Anyway, being a newly-married man in love, every time one of these students’ came into his shop peddling their “One Dozen Long-Stemmed Roses – Only $5.99!” fliers, Tom would pony up his six Washington’s and place his order. I know, I probably sound heartless: What woman wouldn’t love to receive a dozen long-stemmed red roses every couple of weeks? Well, as it turns out, this woman… but I had a valid reason! Even though it was so many years ago, $5.99 for a dozen roses was extremely cheap, even then. Add to that fact that this was a fund-RAISER, presumably meaning that the company supplying the roses actually MADE enough profit to give money back to the school, you can probably get a pretty good picture in your head as to what these babies looked like. So long as they were prostrate in their pretty pink box they looked fairly decent, but when you attempted to revive them by placing them in a vase full of water, you’ve never seen such a sight. The term “limp noodle” doesn’t begin to do it justice!

Anyway, after receiving about seven or eight of these depressing packages, I begged Tom to go easy on the flowers, to maybe give it a rest for “a while.” And so he has honored my wishes for 13 long, flower-barren years! I have explained to him many times in the last 5-10 years that I hadn’t meant that I didn’t EVER want flowers again – I just didn’t want DEAD ones. But to no avail. I know that he loves me, and I don’t need flowers to prove it, but there are those days (and ladies, you know what I mean) when a bouquet of beautiful flowers would just go SO far to make you feel loved and cherished.

This weekend, however, Tom proved his love to me in a more meaningful way than flowers ever could. If ever I doubted the depths of his feelings, those worries have now been laid to rest. The proof? He voluntarily cleaned up doggie puke for me. And not just any dog puke, but a veritable mountain of stinky, steaming-fresh Stitch reflux.

Now normally when one of the dogs has an accident of any shape or size, I hear cries of “Mom!” or “Honey!” I don’t know when or how it became my job, but I learned years ago that if I want it cleaned up right, I’d better plug my nose, roll up my sleeves, and get to it. Yesterday, I heard Tom’s horrified shouts as he herded Stitch out the front door, but I could tell by the sound of his voice that he had reached him too late. I dragged myself out of the bedroom, psyching myself up to handle whatever awaited me. On a brief side note – why, why, why do dogs always choose the carpet when there is nice, easy, cleanable hard floor a mere 3 inches away?! But I digress…

This LOVING, SWEET STUD OF A HUSBAND had beaten me to it! I watched in awe as he tackled the pile with a dust pan and paper towels. My heart went pitter-pat as he rushed, gagging, out of the house to the garbage dumpster, face turning bright red. And again as he and Evan cleaned and scrubbed the rug Stitch had so abundantly soiled.

HE LOVES ME!! HE REALLY, REALLY LOVES ME!!! What more can I say?