Here’s another fun one from the archives. Meniere’s still is a constant battle – as is the longing for salsa! – but I haven’t had any major dizzy spells for about a year now… 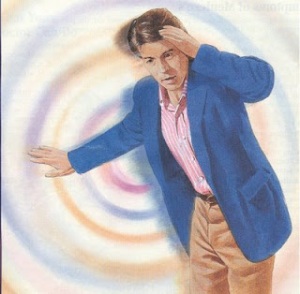 My name is Tracy, and I’m a saltaholic…

Several months ago, I was diagnosed with having Meniere’s Disease, an inner ear problem which causes bouts of severe vertigo, nausea, tinnitus, and a feeling of pressure in the ear such as when you’re driving over a mountain pass, but you can NEVER get it clear.

Basically, the inner ear is made up of canals that are filled with endolymphatic fluid, which is a fluid made up of sodium. Movement of the endolymph in the balance canals creates and sends messages to the brain about the position and movement of your body. When you have Meniere’s, for whatever reason, your body doesn’t regulate the body’s sodium like it should, so it builds up in the endolymph fluid, causing the fluid to build up so the canals swell and don’t work right, causing the wonderful symptoms I mentioned before. It’s like a trip to Lagoon without the steep entrance cost! Even better, you never really know when a spell is going to hit you, so that helps add suspense and excitement… NOT.

I started having symptoms a year ago this month with it really kicking into high gear in January, but I didn’t get a diagnosis until April of this year. So, now that we know what it is finally, problem solved, right?

Ummm… not so much! Doctors don’t really know what causes Meniere’s to happen in some people and not in others. And there’s also not really a cure, but it can be “managed.”

Great – sign me up! But here’s where the saltaholic thing comes in. To help control symptoms, along with a diuretic, they recommend that you limit your salt intake to 1000-1500 milligrams of salt PER DAY. Are you kidding me? I have never been one to use a lot of salt in cooking, but given the choice between chocolate or a salty snack, I’ll choose salt any day. For those of you not in the know (like me until this!), 1500 mg is only 3/4 teaspoon of salt a day. That means I can have all the fruits and veggies I want, but don’t even think about dressing. This for the woman who uses veggies, salad, french fries, steak, etc. etc. as a vehicle for ranch dressing… Dill pickles (which I love) – a whopping 833 mg. for 1medium. Quick bowl of ramen noodles? Over 700. Cooking has really become a challenge: as a working mom, we were eating a lot of packaged food like pasta roni side dishes, baked beans, etc. – all full of salt.

But I digress… I’ve been doing pretty well. I no longer use salt in cooking, I’ve cut out or drastically down on the packaged food, found a lot of low-sodium or no-sodium foods, found a GREAT balsamic dressing that’s really low in sodium (Lighthouse brand, I highly recommend it!), and I’ve given up my morning egg & cheese burritos from Taco Maker (** sigh **), and I rarely eat out.

However, every weekend when I drive to the local Wal-Mart (or as Braden puts it, hell on earth, but that’s a blog for another day) I have to pass by one of my favorite Mexican restaurants, El Toro’s, which has the GREATEST salsa verde that has ever been tasted this side of heaven. Before Meniere’s I would frequently stop and buy a large cup-full, which we’d all devour before the end of the night. I have taken to turning my head when we drive by, because the memories are just too painful 😉

Friday, I lost my struggle. At Wal-Mart, I made a totally premeditated beeline for the tortilla chip aisle, I power-walked into the restaurant, grabbed my brown paper sack with the wonderful salsa (I honestly considered chugging it), and returned home to devour it. I told myself I’d just have “2 tablespoons.” But like any saltaholic, that was just the start. As I made dinner, I ate chips and salsa. My reward for eating all my dinner? More chips and salsa. I deserved SOMETHING for not going garage-sale-ing on Saturday. Yeah, you know what it was. Pretty soon, it was ALL gone. To be fair, I did share a little bit with the kids (actually, Savannah has mentioned something about dirty looks and having to pry it away from me to get her ONE chip, but hey, I didn’t have to let her have any!). Sunday I woke up feeling extremely swimmy, and my ears have literally been screeching at me ever since, especially at night, but it was SOOOO worth it!

I now think I can sympathize more with alcoholics. There was very little self control, and it was all I could think of… Oh, how the mighty have fallen! 🙂 I wonder if there’s a support group for this?